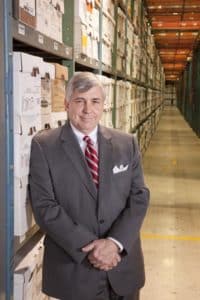 NASHVILLE, Tenn. – (Feb. 28, 2014) Richards & Richards CEO Steve Richards has been invited by NAID (National Association for Information Destruction) to speak at its annual national conference, to be held in Phoenix this April.

Richards, along with Eric Haas of Automated Record Management Systems in Green Bay, Wis., will lead a discussion records storage for destruction companies.

“Speaking at NAID is the equivalent of getting invited to perform at Carnegie Hall for someone in our business,” said Richards & Richards chief operations officer Jerre Richards. “This is a well-deserved honor for Steve and Eric.”

Steve Richards is also in the running for vice president of NAID. The election will be held at the conference.

With more than 1,900 clients storing their records in its 251,000-square-foot records center, Richards & Richards is the oldest and largest single-market, independently owned and operated records management company in Tennessee.

Secure Shredding and the Hybrid Office

Where to Put Your Shred Collection Containers

How You Know It’s Time to Outsource Your Shredding